There has been a lot of publicity about the recent eclipse. This post records my personal experiences. The preamble is quite long, but for me, very much part of the adventure.

My wife, Joan, has a cousin who participates in a multi-site timeshare program. A dozen or so of the extended family decided that we would gather at the venue in Bend, Oregon and travel by car from there the forty or so miles north on US 97 to the little town of Madras to view the eclipse. It was almost dead center on the line of maximum totality.

In February, Joan, and I made our airplane and car rental reservations for the big event.

Unfortunately, an estimated 100,000 people also had the same idea.

As the date approached, postings on the internet became more and more bothersome. It would take 10 hours to travel from Bend to Madras. To ensure that one got to the little town in time, depart by 10 PM the night before. A total stoppage due to breakdowns was a distinct possibility. One may not even get to Madras in time.

The National Guard would be maintaining order. Signs on the restroom facilities in Bend city parks proclaimed “Closed Because Of Eclipse”, and tens of portapotties stationed in their place. Citizens were to stock up a two weeks supply of food. On the Wednesday before the big event, the entire city ran out of gas.

Prices began to soar. Renting one of the remaining cars rose to one hundred dollars a day. It was rumored that Motel Six was aptly named – six hundred dollars for a single night’s stay.

So, it started to sound like the idea of simply bopping up to Madras might not be the best idea. Where else in the area could we go? Even though the band of totality was tens of miles across, the duration becomes less and less the farther you are from the centerline. In Madras, it is a little more than two minutes. A few miles south of Redmond – where the regional airport is – it is only a few seconds.

Joan’s cousins purchased USGS maps and scoured them for alternatives. They weren’t many. Central Oregon is not densely populated. Few roads are there. They ended up selecting a place in the middle of what is called the National Grasslands – west of the route to Madras. By traveling on two lane country roads, some unpaved, we could get far enough north to have more than a minute of totality.

A dry run was in order, and so a few days before we set out in a caravan. The early going was easy – uncrowded, no signs of a swelling influx of people. We came to our first unpaved road and it looked quite decent – smooth gravel and oiled. There was no civilization in sight – no houses, ranches, cattle, nothing, just the flora of high desert.

As we traveled northward, the conditions of the road deteriorated. First, the oiled surface gave out. Then the gravel transitioned to larger rocks. We reached a sign that said the road was not maintained further north. We pressed on and the rocks became boulders. Navigating between them became tricky.

Finally, (duh!), we realized that we were in ATV terrain. Only a hint of a ‘road’ lay ahead. We consulted our maps. After retracing our steps to paved roads, we could go several miles west on State 126 to link up with another unpaved road heading even farther north. Rationalizing that we would be going in the opposite direction on 126 than the influx of watchers from the coast, we pressed onward.

The second unpaved road was also oiled and we traveled along it until it ended at a gate to private property. Farmland on all sides. Except for a haze from uncontrolled forest fires in the area hugging the ground, the sky straight up shown blue and uncluttered. Maybe we had found a place that no one else would think of.

However, one of the owners of the farms surrounding the road then appeared. He was not happy at all about our presence. Even though both sides of the road were fenced off and showing No Trespassing signs, we pointed out that the road itself was not marked private and therefore open to the public.

There were bad vibes all around and we left, wondering what we would see when we returned on eclipse day. Would our route be congested by late comers? At the site, would we see farmers with pitchforks and dogs? Police cars blocking the road? We were not sure.

Of course, the fleeting nature of the event made us all anxious. Only one shot at this. No return the next day to do things better. All it would take was a single wrong turn, slightly more cars than the roads could handle, and the chance would be over.

Not satisfied, we decided to return to Bend. Not along the route we came — that would be an hour and a half even with no traffic. Instead, we drove east to 97 and then south from there. When we came close to 97, we discovered a large park near a gorge spanned by the highway – one with the “Closed Because Of Eclipse” signs. We used the portapotties and as we were returning to our cars, one of Joan’s cousins called out to a couple, husband and wife, passing by, “Say, do you know somewhere around here good for watching the eclipse?”

They were quite friendly. Pointed out that they lived north of where we were standing, in an area near the Crooked River. Gave us their address and said we were welcome to come to their house to watch the eclipse. And, by the way, at the end of the street where they lived – as far north as you could go by car — was Panorama Park – a small public park with parking for about ten cars, restroom facilities, and even playground equipment for kiddies.

We raced back to our cars and followed the directions given to us up to the park. It was perfect – just as described. This became Plan A. If the parking lot for the park were full when we got there then we would use Plan B – the address of the local. The National Grasslands relegated to Plan C.

So, on the day of the eclipse, a couple of the cousins left the Bend area at 3 AM. They traveled up US 97 and there was no traffic. The rush starting at 10 PM had not materialized or was already over. (In the aftermath, the conclusion was that there were only 60,000 in Madras, not over 100,000.) In an hour or so, our advanced party staked out three parking spaces with tables and chairs set out for the rest of us.

Eight others left at 5:30 AM. We traveled the back roads as we had before. No traffic. When we arrived at the park, there were only three cars there. As the time passed, it gradually filled up, but never became over crowded.

At shortly after 9 AM, we whipped out our eclipse glasses, settled back into our lawn chairs, and watched the progress. Totality was about an hour away, so it became a pleasant outing for all concerned. Check on the latest progress. Yes, by golly, the bite out of the sun was getting bigger. Then walk around a bit and chat with the others who had come. A bonding that we as humans do when we are having a shared experience.

A few people used index cards to make pinhole cameras with index cards to view what was happening without using the glasses. Even neater was to examine the trees scattered in the park. As the sunlight filtered through the leaves, many pin hole cameras were formed. Place a large piece of cardboard near the ground and you could see scads of partial eclipses shining through. 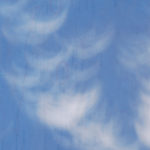 As the transit of the moon continued, we could feel it gradually getting colder – not much maybe twenty degrees at the most but nevertheless one of the subtle clues about what was happening.

Finally, the big event itself. Though our glasses we could see that only a thin crescent remained of the sun – even though the sky around us was not significantly diminished from what it was before the eclipse started. The power of the sun was so great that having most of its rays blocked made no difference.

The last sliver began to grow shorter at both ends finally just a single dot at the edge of the moon. As the last dot vanished, I whipped off my glasses and saw the diamond ring, a brilliant burst of sunlight on the edge of the black disk caused by the last of the sun’s rays coming through a valley between two lunar craters.

For me, seeing a total eclipse was quite different from watching a partial one. A partial eclipse is an intellectual experience; a total one is emotional. I felt as if I were a primitive homonid, looking up startled at the sudden loss of sunlight to see a sight never witnessed before. The sun was gone. In its place was a black disk surrounded by the wispy corona. 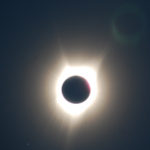 What an impact that was! After years of getting up each and every morning of my life, no longer reflecting at all the usual events of the day – dawn, midday, and dusk. All taken for granted. Samo, samo. Now this! It hammered home a truth long forgotten. How insignificant is humankind in the glory of the cosmos.

I think Joan summed it up the best when she said, “This is the most spectacular thing I have ever seen in my entire life.”