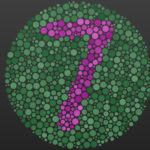 I have known about this for years, and it does not bother me very much. I can tell a red light from a green one on the street, and my driver license tests are no problem. But in the past, I did encounter one situation…